Guest blogger and friend of Organic Roofs, John Adams, the transcriber and co editor of ‘The Syon Abbey Herbal, AD 1517′, talks about which plants may have been found on medieval green roofs and which ones can still be found at the abbey today.

There is currently a passion for planting green roofs, where the flat surface area of the roof is set out with carefully chosen plants. Many of these plants have had medicinal uses in the past, and it might be pleasurable to choose herbs with historical associations.

One good example is the stonecrop family, which, as their name suggests, do well on stony ground such as roof surfaces. Stonecrop’s medicinal uses have long since fallen away, but one green roof variety, the appropriately named Houseleek (Sempervivum tectorum) had a vivid folklore. It is described as early as AD1400 as growing on ‘moist walls and houses’. It was said to avert lightning strikes, and to cure a worryingly wide range of conditions from corns on the feet, to migraine – not to be tried today!

Students at Rodbaston agricultural college near to Stafford have however found another and safer use for stonecrop – to adorn the wire-frame of a life-size model bullock. Clearly a versatile plant, which can thrive without much care or watering.

Or perhaps you might like to go for Self-heal (Prunella vulgaris). Again, its medical use is not to be recommended, but it was in the past applied to ‘green wounds’ and on the temples for headaches, together with rosewater.  It was mentioned as growing on the then abandoned site of Syon Abbey in west London in 1549 by William Turner, the father of English botany, and we tracked it down as still there in 2014. So a plant with a charming name, that has lasted nearly 500 hundred years on one site – and might do the same on your roof!

Another useful roof plant is the fragrant Marjoram (Origanum vulgare), which also delights in stony ground (it thrives, for example, on the chalky North Downs at the old Croydon Airfield, just off the busy Purley Way). It too had in the past a variety of uses, from alleviating toothache, to strewing on the floor for its sweet smell.

Similarly, another suitable plant is Corn Gromwell, Lithospermum arvense. Thomas Betson, the last librarian at Syon Abbey (d.1517) says in his herbal of this plant that it can be used for treating gallstones, and if mixed with Rue and Parsley and drunk with wine, was good for a man who had trouble passing water (actually: ‘for a man that mai not well pisse.’) 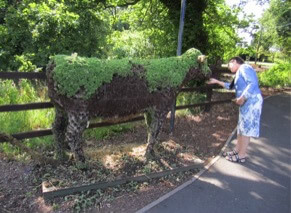 And finally you might do your bit to save the ecology, and go for species which are rare and declining, such as Dense-leaved Fumitory, Fumaria densiflora, or Fine-leaved Fumitory, Fumaria parviflora. Thomas Betson of Syton has a fine entry for Fumitory (though it is probably the Common Fumitory or Fumaria officinalis).  This plant, he says, ‘is good for all manner of evils in a man’s body.’  Enough said.

John can be contacted by email at: web@amcd.co.uk

What does a green roof look like in winter?

Ever wondered what happens to a green roof later in the year?